I appreciate the truth. I appreciate when justice is served. Watching the news is something I don’t do. However, in this day and age it is hard to NOT have the news interject itself into your life somehow. Social media is filled with news videos and snippets, friends post and re-post articles and comments. No matter how much you don’t want to see it, inevitable you do.

I’m not a huge fan of politics, either. Yes, I vote and I have since I was old enough to. Discussing politics and having debates – totally not my thing. I vote for what I feel is right and fair and in the best interest of all of us as a whole. If that’s even possible to do…

With all of my friends sharing stories from their past that they haven’t talked about in years or maybe even never talked about at all before; I decided I needed to share my stories, too. If in sharing I can help one other person to feel that they are not alone then it will have been very much worth it. For me, this circus that’s been all over our televisions, news outlets and social media feeds is not about politics.

Let’s start with the first one. 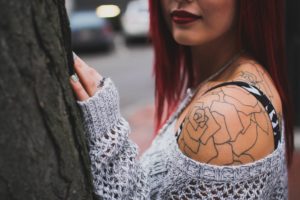 I was in high school. I was a punk girl complete with mohawk, ripped tights, combat boots, and a rageful attitude. He was a jock that sat next to me in English class. Total opposites when it comes to high school cliques, right? I asked for the hall pass to go to the bathroom and mysteriously he needed to go, too. So we had to go together. After we each used the bathroom he said he needed to go to his locker. I had to go with him because we had one hall pass between us so, we had to stay together or one of us would get into trouble.

I’d had enough trouble with being expelled a couple years before so I obliged. He wanted to take the “back way” which involved using stairs that were enclosed and hardly ever used – and since class was in session it was that much more unlikely that anyone would be there. Once we got behind closed doors he pushed me against the wall, pushed himself against me, and grabbed my hand and put it on his crotch. I pushed him off of me and went back to class. He came running behind me so he wouldn’t get in trouble, of course.

Did I tell anyone? No. Why? Because I didn’t think they would believe me because he and I were not the “same type of person”.

Not long after that incident came the next one.

I got my first job ever when I was a Junior in high school working at the new local food delivery franchise. We did take out and delivery and our delivery drivers were mostly middle-aged men that either still lived at home or did delivery as a side gig to make extra cash. Most of them were pleasant and polite and would make small talk while they were waiting for us to pack the orders. There was one guy however, that thought it was cute and funny to make sexual comments and tell dirty jokes. The girls that worked there were TEENAGERS. He was easily old enough to be the father of any of us.

His sexual comments and dirty jokes turned into slaps on my ass when he would come in from deliveries. The slaps on my ass turned into him just picking me up and putting me over his shoulder and carrying me around the restaurant. He worked for the city full time. He had a wife and I am pretty sure he had kids that were my age or older. At the time, I had a boyfriend and I eventually told him what had happened. My boyfriend then told his parents what had happened. His mother was irate and said I needed to tell my boss. I didn’t want to – I was scared they wouldn’t believe me, scared of what he would do when he found out I had told on him, and scared of losing my job. She assured me it was the right and best thing to do.

So, I told my boss and the business owner.

Neither of them had ever witnessed it themselves – he was on his best behavior when they were around. I told them what had been happening through tears and fear. Without hesitation they called him in to speak with them. I don’t know what his version of the story was. I doubt he admitted it – unless he just tried to play it off as a “joke” and “fun”. Maybe he denied it. He was given the option to quit or be terminated.

The next day I answered the phone at work and it was his wife.

She started screaming at me and calling me a dirty little slut. “How could I do this to her husband?!”. I started crying and hung up on her. I couldn’t understand how she could think that I would make up any of what happened. How could she not know her husband was a slimeball?! I was so naive. It was easier for her to blame me than to accept the truth. I understand that now. I also learned that while some people will believe you, there will inevitably be people that do not. No matter what.

In my mid-twenties I worked two jobs to make extra money after going through a divorce. My day job was in an office and my part-time night gig was in a fast food restaurant. I loved my job and I thought I worked with a bunch of cool people. Even my managers were cool. My boyfriend was out of town so I was working extra nights to occupy my time and of course make money.  I typically worked until about midnight. My manager, who I considered a friend, said he was going to grab a drink after work and asked if I’d like to go. I agreed – I’d had a rough week so, why not? 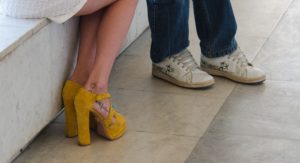 I had a tendency to drink to excess back then and I overdid it a bit that night. He lived right across the street from the bar and told me I could go back to his place and crash so I wouldn’t have to drive. Well, he really had other ideas. Did I tell anyone? No. Why? I felt responsible for his actions because I allowed myself to get too drunk. Yep, you read that right. I felt like it was my fault because I had let myself drink too much. Yet, I had also thought I was out with someone that was my “friend” and was looking out for me. I was embarrassed and ashamed. I blamed myself. A friend is someone that helps you when you’re incapacitated not someone that takes advantage of you.

In my adult life most people have always seen me as “tough as nails”.

I’ve been referred to as “not someone to mess with”. They also say I am “so super nice” and “always have a positive outlook”. All of those things are true. Even being viewed as someone you should think twice before crossing didn’t protect me from anyone trying to take advantage of me. Just because we were both teenagers, “kids” if you will, didn’t make it okay for that boy to shove me against the wall and force me to touch his crotch. Just because the middle-aged guy I worked with was much bigger than me didn’t give him the right to just pick me up and throw me over his shoulder like a doll. And, just because I had drank too much it didn’t give my manager, someone I considered a friend, the right to take advantage of me and the circumstances.

Doing a quick Google search of their names shows how their lives have moved on and seem basically unaffected. One is a high level financial adviser and is married with two kids, one is probably preparing for retirement, and the other is being inducted into local Chambers of Commerce and has at least one child. Seems they’ve all been successful. I’ve also had my own great successes in life since those events. The one difference is that those events have consistently remained in the back of my mind. Their names can not be forgotten or their faces. I’ve had the uncomfortable instance where I have seen two of the three out in public and I have ducked out of sight or left the location completely. I’m pretty confident in saying I doubt that any of them have given any of those events a second thought. Ever.

So, do you doubt me or believe me?

If you believe me – thank you. I have no reason to make these events up and I hesitated for many days to even publish this post. If you doubt me – what would you need to convince you that these events really did happen? Why would you think that I made these scenarios up? Just because I don’t have “evidence”? What “evidence” would suffice as proof to you?

My voter registration aligns me with the Republican Party – I’m sure that’s probably not what you thought while reading this. That alignment does not mean I always vote Republican. I vote based on who I feel is best qualified to handle the job – and character. I befriend people based on their character. Sure, we’ve all made mistakes in life and done things we regret. How we deal with those mistakes and regrets when confronted about them speaks volumes about our character – no matter how many years later it is.

Watch your character; it determines your destiny.

The contributor of this viewpoint editorial has asked to remain anonymous. If you can relate to her story in any way our thoughts are with you. If you are ever in a position where you need someone to talk to and you don’t know where to turn you can always contact the National Sexual Assault Telephone Hotline in the US: 800.656.HOPE (4673). There are also international resources through RAINN  (Rape, Abuse & Incest National Network). Additional international resources are available through the International Rape Crisis Hotlines which can be found here: http://www.ibiblio.org/rcip//internl.html

You are not alone.